My husband Scott and I have run this race three times: 2011, 2012, 2014. We were looking for a turkey trot near East Rutherford, NJ, where we were living at the time, and we found the Ashenfelter 8K. It was within 30 minutes of our town, relatively inexpensive, started early on Thanksgiving, gave us plenty of time to finish, come home to shower and get to his parents’ house for dinner. It was perfect. We had run a few small races and had great success in these (I had placed in my age group twice). We were convinced that this would be a piece of cake.

Oh, how wrong we were. Just because it’s held on Thanksgiving, doesn’t mean it’s a traditional turkey trot. The Ashenfelter 8K is a little more serious than that. First off, it’s the most random distance I’d ever run (8K is 4.97 miles. Why not just make it a 5 miler?). It celebrates Horace Ashenfelter, a Glen Ridge resident who was a premier distance runner and celebrated Olympic athlete who won the 1952 Olympic Steeplechase. When you’re running a race that’s a nod to that caliber of runner, entire high school track and cross country teams show up. All three years we’ve run it, there are only a handful of people who dress up, you get the sense that the racers are there to be active in their home town. The course starts at a local high school, runs through the neighborhood where residents come out on their front lawn to cheer for the runners.

We’d been lucky with the weather so far this Fall/Pre-Winter and hadn’t had that many cold days. Unfortunately, the cold front decided to really hit the NE the week of Thanksgiving. The night before the race, NJ was hit with a wintery mix and Glen Ridge had a little accumulation. We were assured that the race would be held no matter what, as they had a very capable road crew that would clear the roads for us.

The morning of the race, the temperature was just above freezing and it was snowing off and on. Snow started to come down during the first mile. The best distraction to the cold was a man dressed as a turkey running just in front of me. The neighbors along the course were delighted to see him and parents were eager to point him out to their children. Other runners were commenting on him as well, especially when he started to pass people. “I can’t believe the turkey is going to beat me” or “HE WAS PARDONED!” 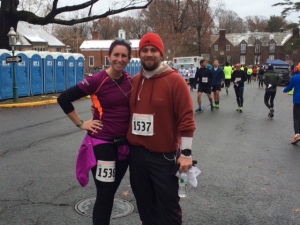 Race Organization: 4 – Day-of organization for this race has always been close to perfect. They have volunteers stationed at the entrance of the HS gym directing people to packet pick ups, restrooms and answering questions. There are announcements fairly frequently reminding everyone how much time remained to the start time and when to begin moving outside.

Level of Communication from race organizers: 2 – I received a confirmation email from Active.com after I registered, then never heard from them again. Scott and I had to go back to the website to determine packet pick up times and race starts. They also don’t email you after the race, so they truly rely on grassroots marketing to keep runners coming back (and it’s working).

Race Course: 3 – As I mentioned above, the course runs along the town streets so you get a view of the beautiful homes in the area and the town residents. The streets are closed and local police are along the course to make sure everyone is safe. It has a few rolling hills (that I tend to forget about), but nothing too steep.

Swag (in the race packet): 3 – Since most people pick up the packet the day of the race, there’s a lot offered before the race in the HS gym to everyone who’s keeping warm before the race. There’s bagels, donuts, organic muffins, hot chocolate, water and coffee. I don’t expect much from a smaller, local race so a free breakfast is always welcome.

T-shirt: 4 – This year’s shirt was the best I’d ever received. They have had very 80s style artwork on the front in previous years, but this one was beautiful. It was black for the first time since we’ve started running the race (it had been white which always made me nervous that I would sweat on it wrong and stain it). It was beautiful. They had run out of my women’s size, so I opted for a men’s size. It’s loosely fitted and long sleeved. I’m happy with my decision as I saw a lot of women with short sleeved shirts (in the snow). Race organizers – if you’re reading this, please go with long sleeve for everyone next year!

Medal: 1 – No medal, but in addition to the typical age group awards, the first 100 male and female finishers receive a commemorative ceramic coffee mug. I’ve wanted once since I first read about this race and it’s my life goal to receive one.

Spectator Support: 3 – You can’t go into these locally run races and expect the same turn out as the NYC Half Marathon. For the race it is, and the weather conditions, there was more crowd support than I expected. Neighbors came out to cheer, some made their own fluid station in their front yard and handed out Gatorade to passing runners. One man who had finished his run stood on one street corner to cheer in his 2013 NYC Marathon poncho, which I complimented him on. My favorite was an early-teenage boy standing on the lawn with his parents. He, very obviously, did not want to be there and spent his time throwing snowballs at his front door instead of cheering.

Post-Race Swag: N/A – Because the race isn’t very local for Scott and me, we’ve never gone back inside the HS after the race where, I assume, the post-race swag is. Once we finish, we take our complimentary bottle of water and head back to the car to make a swift getaway to shower and head home for Thanksgiving. I assume they have the same food and hot chocolate available that was offered before the race, but the could also offer an entire Thanksgiving brunch for all we know. If they do, we’ve really been missing out.

What races did you run on Thanksgiving? Tell us about it in the comments section!